If you read Dragos' blog, you may be already familiar with the concept of reusable habits. In short, it’s about building those habits that have a better chance to be reused, based on your context. For instance, if you create the habit of aggressive budgeting, you may use this in any context where money is involved (and in our current world, money is involved everywhere). On the other hand, if you build the habit of going to the sauna, you may find that very few places on Earth can accommodate this. So, as a general rule, creating habits that can be reused in any context is a more productive approach.

On top of that, I also use the concept of “gravitational habits”. This works regardless of the context, and refers to habits that we may use in any circumstance of our lives, by being “pulled” towards them, almost without any effort, just like gravitation works.

Our current universe works in a very specific way: it links the gravity an object generates to its mass. So, if a planet has a bigger mass, its gravitational pull will be stronger. An asteroid, on the other hand, with a smaller mass, will have a weaker gravitational field. To oversimplify: the more mass you put together, the bigger the gravitational field.

The first case is the most disruptive one. It usually happens when we encounter really big difficulties or when we’re faced with serious decisions. For instance, you may go out for drinks every Saturday and come back home slightly tipsy. Until, one day, you come back home Sunday morning way more than tipsy, barely remember the night, and what you reconstruct based on the receipts of your credit card is really scary. The next Saturday, with a big effort, you decide to do 2 hours of volunteering, instead of going out for drinks. It’s a big “actionable mass” you create all of a sudden, a relevant disruption. But the amount of “mass” you put into it might be just enough to generate enough “gravity” for this volunteering habit.

The second case is more boring: you add very small quantities of “actionable mass” every day, until you reach a tipping point (or, to be more precise, a “tipping amount of mass”). This is how I implemented my morning routine, which includes a bit of yoga and meditation. I started it years ago, by putting in just 10 minutes, regardless of the context, of my mood or anything else. Just one sun salutation in the morning, but done each and every day. This, in time, generated so much “actionable mass”, that the gravitational pull of this habit became incredibly strong. It’s so strong, it survived every major disruption in my life. For instance, during the last few months, I had to go through some major ups and downs (like everybody else, for what matters, since I’m talking about the Covid-19 induced lockdown). During this time, I did almost every day my morning routine, without even thinking. I literally felt “pulled” towards doing it.

If you really think about it, every time you do something, you create a little bit of “actionable mass” around that something. The more you do it, the more “mass” you add to it, and that, in turns, literally creates some sort of gravitation towards that thing. In time, the gravitation will be so strong, you’ll be pulled towards that on auto-pilot.

Just keep in mind it goes like this with everything: stuff you want to happen, and stuff you don’t want to happen as well. Everything you do is, in fact, a tiny bit of “actionable mass” that will generate some gravitational field at some point. 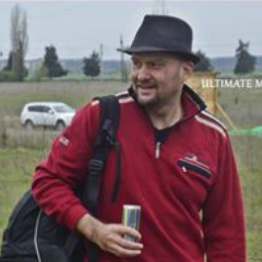 Story teller, geek, light seeker and runner. Not necessarily in that order. Author on living a better life, screwing it up, and everything in between.